Why now is the best time to tackle your wasp problem

Now that we are fully into the summer months, people may start to notice wasp problems in their home. Active wasp nests in a property, hibernating queen wasps waking too early, and nuisance wasps where the nest cannot be found are all very common during warm weather, but no matter what the problem, the safest way of dealing with wasps is to get the nest treated by a professional wasp controller.

Wasps are naturally defensive of their nests and will sting anyone or anything just for walking close to it. 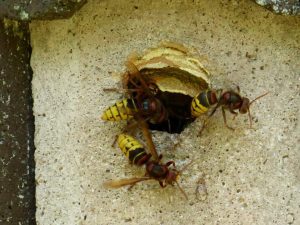 Wasps spend a lot of time hunting for smaller insects which live in dirty places, meaning their stings are not only painful but also carry a risk of infection.

Products available from DIY stores and garden centres claim to easily get rid of wasp nests, making it tempting to try and save yourself a few pounds. But choosing to get rid of wasps yourself is not a decision that should be taken lightly and can be dangerous if not done properly. We are often called for help after a customer has attempted to destroy the nest themselves but have been overwhelmed by the wasp’s reaction.

In the spring when nests are first built, there are only a handful of wasps at most within the nest. Starter nests in home lofts vary in size, ranging from 1 inch to 3 inches in diameter, and resemble a grey coloured golf ball. Any nests much bigger than this are starting to grow and will contain a large number of wasps. As the summer progresses, the nest grows in size. By late July into early August the nests will be at full strength, making it the most dangerous time to interfere with a wasp nest.

Confirm-a-Kill wasp termination expert, Ray Feetham, said: “To treat this type of problem, most pest control units have a fogging machine which uses a liquid insecticide that is sprayed into the loft area through the machine. Most do-it-yourself traps are low in efficiency, and don’t kill all of the wasps. You may see lots of dead wasps in the bottom of the traps, but compare that number with the amount of wasps there are in the nest and the percentage killed is very low.”

By using these low efficiency wasp traps you would in fact be feeding the wasps and encouraging them to the area where the trap is set. As pest controllers, we do not always have to kill vast quantities of creatures to take control of a situation. Instead, we can use behavioural patterns to our advantage.

Due to changes in climate, we are finding that mild winters bring large queen wasps indoors. This problem arises when the temperature rises above 7 degrees for a considerable amount of time. Queens which have woken up due to the increase in temperature can find their way indoors via holes, attracted by any light source. Queens generally hibernate in loft spaces as the temperature remains stable and it is dark.

If your neighbour has a wasp nest on their property and they refused to have it destroyed, to protect your own property and wellbeing we need to get control over the problem nest. We cannot destroy the nest and we cannot kill all the wasps, but we can control where they feed.

The treatment of wasp nests is a fairly straightforward exercise for an experienced professional, but not something that should normally be treated lightly. The moment you disrespect a wasp nest is the very moment that you get stung. It is far better and safer to allow a professional qualified pest control technician to deal with the problem for you, as they will have all the necessary protective equipment and experience.